As the time comes inching towards the first time you are going to DM, the nerves start jangling, the butterflies flutter and all you can do is hope that you have done enough preparation and that whichever Deity you have signed a pact with is with you. Here are some of the things I did to specifically prepare for the first session of Lost Mine of Phandelver from the D&D starter set.

Warning: Even though I have tried my best not to, this will probably contain spoilers for Lost Mine of Phandelver adventure. Sorry.

Check out my other two articles on preparing things in general:

Guessing what the players will do

“In preparing for battle I have always found that plans are useless, but planning is indispensable.” ~ Dwight D. Eisenhower

So, given a play time of 1:30, maybe 2hrs, I started to guess where in the adventure the players would get to. At this point in time, the adventure would be fairly ‘on rails’, in that, what the players would be trying to achieve could be predicted fairly accurately. Hopefully you’ll have some nice players who will be guided by the DM in the first session rather than immediately making things difficult for you!

The opening of Lost Mine of Phandelver broadly splits into 3 parts:

By my reckoning, if the players worked through the adventure as written then they’d almost certainly make it through the Goblin Ambush and probably make it to either the opening part of Cragmaw Hideout or Phandalin.

Reading over in more detail these 3 parts I was super confident in running the Goblin Ambush effectively. It had just the right complexity for an opening encounter. I was less confident in the Cragmaw Hideout and arriving at Phandalin.

Cragmaw Hideout is significantly more complicated from a ‘dungeon crawl’ point of view, and Phandalin is significantly more complicated from a ‘role playing’ point of view. Without doing anything to prepare for my first session I’d not only have to prepare for running Goblin Ambush, but also prepare for running either Cragmaw Hideout OR Phandalin depending on what the players picked, this could have almost TRIPLED my preparation time!!

I needed a way to limit the amount of work I had to do, without seeming to limit the choices of the players …

The illusion of choice

The absolute best thing that could happen at the end of the session would be that it ends when they make a decision as to where they want to head to. That way I would have a week longer to prepare… and even if they DIDN’T get to this point, I would still be able to move preparation into next week rather than this week.

Currently the Lost Mine of Phandelver adventure starts literally at the Goblin Ambush. To achieve my objective I extended the introduction. Through this extension I wanted to focus on role play. This was because if the party chose to go Goblin Ambush -> Cragmaw Hideout -> Phandalin then it might be a few sessions before we did some serious role play and as I had new players I wanted to get them to understand that role play and combat are equal partners :)

Starting at the beginning

To do this I had the characters meet at Gundren’s warehouse. Here’s why:

So to set the foundations of this start for my characters, I:

Check out the appendix at the end to see copies of the content I produced.

Drama is conflict and so to aid that I added a couple of bones of contention that may or may not come to fruition over the course of the session(s):

Hopefully this means the characters will naturally fall into a form of conversation.

I created a map that would serve as the Goblin Ambush point on Inkarnate. I then had to upload this into Roll20 and what not. At this point my Roll20 campaign consists of a overview map of Ampicea, a more detailed map of the travel from Bariande to Phandalin and the map for Goblin Ambush

Learning how to use GIMP

I used GIMP to create a lot of the tokens I needed for Roll20, this is important because then you can use free to use/open source images to create tokens for your Roll20 game rather than pay for them. Learning the basics of making a token from a few source images will massively help here. Or you can buy the adventure packs :)

Hopefully this gives you some idea as to the amount of work I, and perhaps by extension you, put into prepping for my first DM session using the Lost Mine of Phandelver adventure. I like a 50/50 mix of role play and combat in my sessions so this tweak I made helped me introduce that aspect to the opening session and also reduced the amount of prep work I would have to do with the adventure itself for the first session.

Thanks for agreeing to help transport the cargo, I’ll sleep better knowing you are there watching over things. I’ve managed to get some others to travel with you, don’t worry they’re not green. Best I could afford!

If you could arrive at my warehouse at about 8am and then aim for a 9am start. You just have to escort the cargo to Barthen’s Provisions in Phandalin. I’ve told him that you are bringing some goods for me and to be expecting you. If you show him this letter when you arrive he will pay you.

Should be no trouble!

I will have set off the day before so will meet you there. I am excited to show you what we have found!

Thanks again and say hello to your father for me, I can’t wait till me next birthday and me next keg!

You should find a map with this letter in case you don’t know where Phandalin is!

As agreed with our ‘mutual friend’ on safe arrival of the cargo at Phandalin you will receive the sum of 10GP on production of this note to one, Elmar Barthen of Barthen’s Provisions.

Please arrive at 8am at my warehouse and ask for Hjulkyl. He’s the stubborn ugly dwarf, you can’t miss him.

Thankyou for agreeing to accompany our humble caravan to provide magical protection. Whilst I believe it will be a safe trip, you can never be too careful nowadays, especially on the road to Ingstone. Please ensure my cargo makes it to Phandalin, whereupon its safe arrival at Barthen’s Provisions, one Elmar Barthen will ensure you are compensated to the tune of 10gp.

Please arrive promptly at 8am at my warehouse next Thursday. When you arrive, ask for Hjulkyl. He’s the stubborn ugly dwarf, you can’t miss him.

As agreed on safe arrival of the cargo at Phandalin you will receive the sum of 20GP on production of this note to one, Elmar Barthen of Barthen’s Provisions. Please do not share this financial arrangement with the others. Your services did not come cheap. I am expecting much!

Please arrive at 8am on Saturday at my warehouse and ask for Hjulkyl. He’s the stubborn ugly dwarf, you can’t miss him. 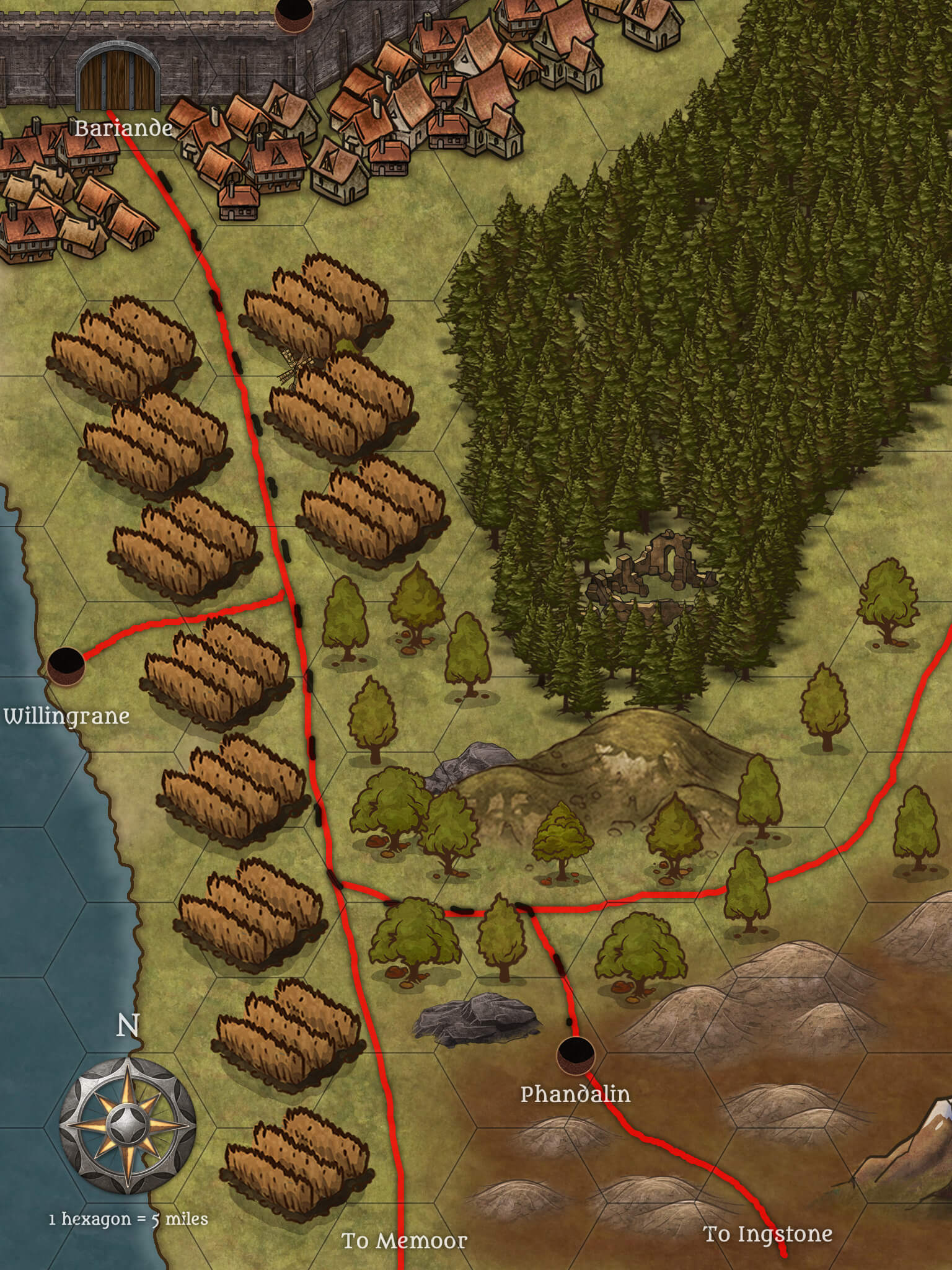 Goblin Ambush map for Lost Mine of Phandelver

Tokens and other imagery

I needed to create tokens for my players and also find imagery of dead horses. I am hesitant to include these here because I am not 100% certain of whether the images I used can be shared that way. Anyway, get good at googling and using GIMP and this shouldn’t be too onerous.

DM Notes for the session

Here are my DM notes I made before the session started:

Opening It’s a crisp, beautiful morning in Bariande, as Hjulkyl the dwarf arrives at his friends Gundren Rockseekers warehouse. He’s late, and as he turns into the yard he can see its a hive of activity. Most are swarming around a wagon in the centre of the courtyard that is being loaded with suppliers. Next to the wagon stand 3 folks who look out of place. They aren’t doing any of the work and are clearly armed. These must be his companions for the journey.

Hjulkyl: Make an insight check. 10 or above he can tell they’re pissed off. What do you wanna do?

As the conversation begins to wane then have one of the workers head up and tell Hjulkyl that they can head off.

As you move out of walled city, the township starts, houses, people, hustle and bustle. The road is busy, mainly because of a queue of carts trying to get in the city. A few minutes later it turns into fields and farmland the road noticeably less busy.. The weather stays bright and sunny as you clock in your first mile or two on the road.

They travel for the day nothing much happens .. try and get them to talk.

If they stay outside then: Overnight get them to make perception checks … if anyone gets over a 20 then they notice the goblins scouting them out… But the goblins don’t attack

Wake up the next morning well rested. Pack your stuff together, and head out. The weathers a little grey, but not raining. … you head out once more, all of you getting starting to wonder a little about why you were even hired for this job … this is the easiest 10 gold you are ever going to make.

As you make the turn down the Tribor trail, you spot … lead into description from LMOP Rest of adventure run from book