Here are a few things I did as a newbie DM to prepare for the Lost Mine of Phandelver adventure that is contained within the D&D starter set.

Warning: Even though I have tried my best not to, this will probably contain spoilers for Lost Mine of Phandelver adventure. Sorry.

From the outset I knew I wanted to use the adventure, but I also knew I would probably want to change bits of it and would want to experiment with some of my own world building. With this in mind the first thing I did was read the adventure cover to cover, twice.

I then started trying to formulate the pillars upon which my world existed, I wanted:

So with those two things and having read the Lost Mines of Phandelver a few times, I set about defining my world:

So at first I drew a map where the layout was HEAVILY inspired by the layout of the Sword Coast map on the adventure pack: 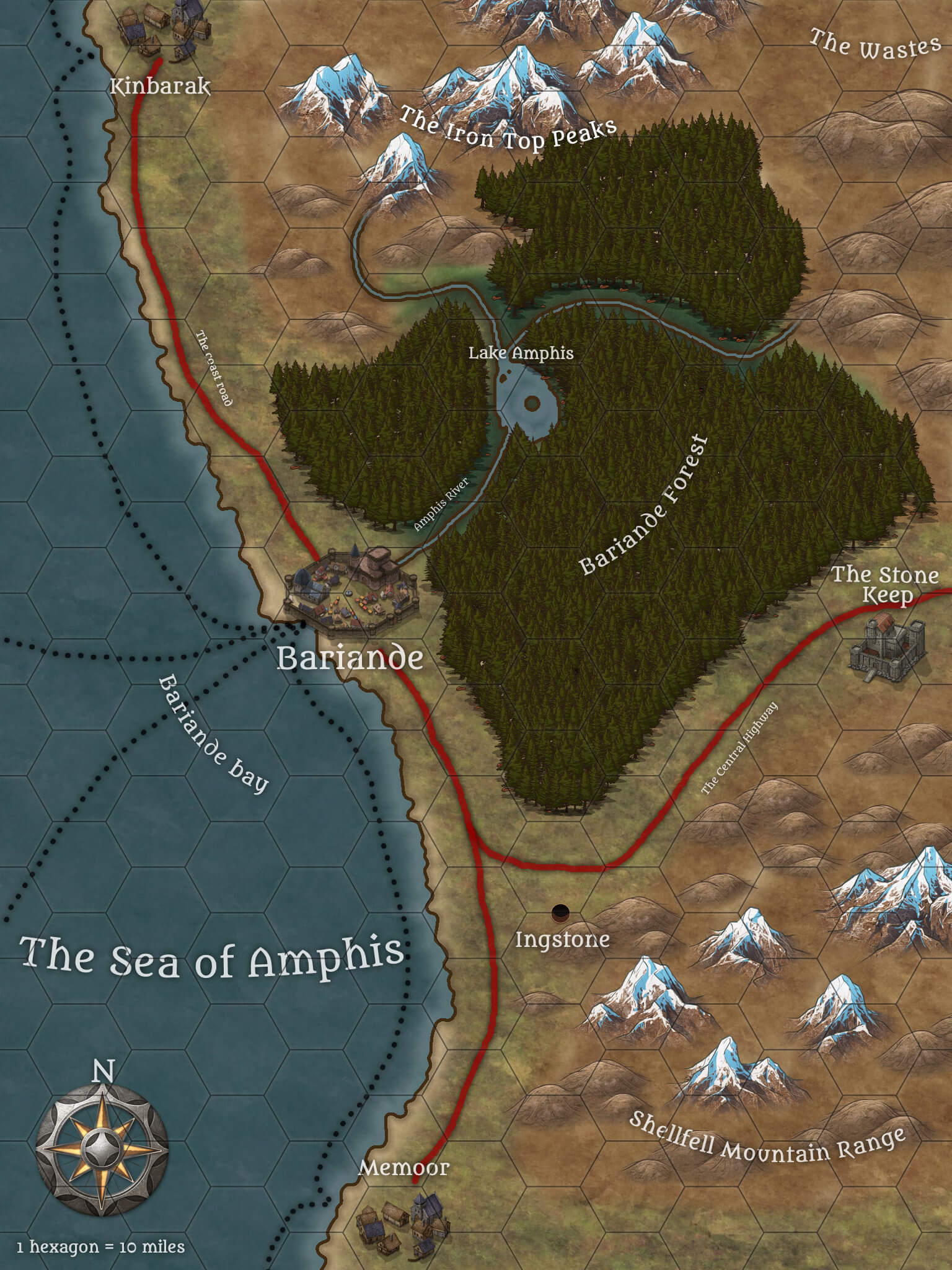 This is different yet similar enough that I could place things in a similar position on the map (meaning that I wouldn’t have to re-write ALL the details in the adventure guide).

I used Inkarnate to draw the map and Fantasy Name Generator to come up with the place names.

Having during lockdown listened to a obscenely large amounts of Critical Role, I’d really been inspired by the descriptions of Asarius, City of Beasts. My other main inspiration, especially for what I wanted a ‘Capital’ city to be like, came from Ankh Morpork and the Discworld series, I really wanted to reflect some of that ‘melting pot of cultures’ vibe in the world I was creating.

With those things in mind I then wrote a little overview that would tie in my pillars to this new place and allow my players to be inspired to create awesome backgrounds for their characters.

Things I think its important to include:

With this overview of the world created, hopefully I would be able to give my players enough inspiration, whilst also providing some constraints for creating their backgrounds. Below is the one I created. Happy creating!

The land of Amphicea is a relatively young democracy renowned for its invention and wealth. Splitting from the Empire 200 years ago it has maintained its independence due to its geographical location and the will of its people. Sandwiched between the Empire in the south and the Xosta Kingdom to the North and East, it has managed to become a melting pot of civilisations. Where Goblin, Orc, Elf, Dwarf, Human, Bugbear and everything in between, are free to live, love and earn some gold. In fact, it’s positively encouraged.

The current Patrician of Amphicea is Alpenmaw Sternbeam. He is the head of the current ruling party, the Free People’s Equilibrium Movement. Every 5 years the people of Amphicea vote for who they believe should lead the country. The Free People’s Equilibrium Movement has been in power for 20 years and Alpenmaw has been head of the party for the last 14. Broadly speaking, this government has been looked upon favourably and for the last 10 years, since the discovery of mineral rich mines in Ingstone, seen a boom in economic prosperity and invention.

Bariande is the capital city of Amphicea and has expanded rapidly in recent years. Originally a walled city, now surrounded by a large township, Bariande is a vibrant multicultural hub. It is famous for its markets, library and university, craftsmanship and the uncanny knack of its denizens of making sure you spend every penny you have.

An impenetrable fortress that guards the central highway and the Eastern border of Amphicea.

An old mining fortress that has recently exploded in size due to the recent discovery of a diamond mine. Provides access to the Shellfell Mountain range and trade routes to the East.

A major trading hub with the Empire, famous for its travelling markets which bring goods from all over, in and out of Amphicea

A large town famous for its chocolate, the craft of magic weapons and armour and variety of its denizens. Slightly more ‘liberal’ than even Bariande.

Amphicea was liberated from the Empire by Lord Bariande. 200 years ago she raised an army of like minded lords who ‘liberated’ themselves from the taxes of the Empire. It is said she nearly drowned in Lake Amphis taking a pleasure cruise with her entire household staff crammed onto a small boat. After this experience she was reborn as a new woman. Realising that her previous lifestyle had been frivolous and inconsequential, she started a 20 year war with the empire which led to the declaration of Amphicea as a small, but powerful nation state. On winning the war she instituted the first ‘Peoples’ Council’ and set about defining the system of government that is largely used today. There is a large statue to Lord Bariande in the central square of Bariande and Lake Amphis is now a popular destination for pilgrims of all sorts who wish to renounce their hedonistic lifestyle.